“I count myself as a ‘gudi’ member more valuable than my post graduate degree”, says Fr. Francis T.

Fr. Francis T was born on 19-01-1950 at Appaltuvilai, Kanyakumari in Tamilnadu. He was ordained a priest on 8th May 1978, at Appaltuvilai. The urge to serve was so strong in his personality that he chose the prayer: “Lord give me the strength to make my love fruitful in service” in the ordination souvenir. Fr. Francis T said, “Jesus being my model to serve, always I felt the service I render is too little”.

The newly ordained priest was appointed at Lawan as Assistant Priest where the villagers, nuns and priests join for the prayer meeting which is ever fresh in his mind. He recalls his elevating experience of working with an experienced and dedicated missionary, late Fr. Julien Fernandes in Malkharoda in 1979. After 18 months of service in Malkharoda, he moved to Dewarghata.

He served in Dewarghata from 1981 to 1989, where he had to stay in a hut for the first 2 years paying Rs. 15/- per month as rent. He says with a smile, “Those days spent in hut were the best days of my priesthood”. The poorest of the poor could very easily approach him in the hut because they felt very much at home with him. He learnt to speak Chhattisgarhi, and it took more than 3 years for the people of Dewarghata to accept him in their community. They made him a gudi member of the village (gudi is respected team of elders who can judge locally without approaching the police or court). Fr. Francis T says, “This acknowledgement of the villagers, I count more valuable than my post graduate degree”.

He was related to every family in Dewarghata. Jesus took the bread and broke it and gave it to his disciples and he asked them to do it in memory of him. Every disciple of Jesus also needs to break himself / herself and share with others. By sharing his talents, time and energy in Dewarghata mission, Fr. Francis T led a Eucharistic life. He was the only Catholic there for the first five years.

In 1989, he was appointed as Parish Priest of Risali. In his tenure, he constructed the church with the kind cooperation of parishioners and diocese. In the year 1993, he was appointed as the Diocesan Director for Social Works along with the responsibilities of being the Parish Priest and Manager of Vidhya Jyoti School, Kumhari. The social work activities were spread over to the length and breadth of the Diocese. Annual plan was made in consultation with the zonal Coordinators and after having planned it, whether rain or shine, the programmes were carried out with the well motivated team members. He could easily cover large area of work because of the policy of bread being broken and the attitude of selfless service.

In 1998, he was appointed as the first Forum Director in Bhopal for the undivided MP. He was also given chance by the M.P Bishops to be the project selection committee member of Caritas, New Delhi, for two terms.

Mission in the Urban Parishes

In 2005, he was appointed as Parish Priest and Manager of Weidner Memorial School, Mahasamund. The school problems were settled by the grace of God within a span of 15 days. The lapsed catholic families were re-energized and they became a very vibrant community. BCC meetings were regularly conducted in all wards. He counts it as a blessing that he managed to procure 10 thousand square feet of land
which was between the school and church, owned by the
Nagar Pandit Mr. Jailal Maharaj.

As Cathedral Parish Priest in 2008, BCC meetings were established in all wards. He organized three pilgrimage trips in view of establishing cordial relationship with every member of the Parish. He was out for the family visits almost every day.

As he became the Parish Priest of Parsahi in 2012, he initiated retreats for people in and around Parsahi on every first Sunday of the month. In 2016, he was entrusted with the parish of Bhanpuri. Youth and BCC groups got re-organized and were very vibrant in their activities. He was taking a few scripture classes for the minor seminarians.

After he was entrusted with the Parish of Bilaspur in 2017, he is trying to strengthen BCC groups in Bilaspur too. He has taken the family visits as his top priority. The Parishioners of Bilaspur are ever willing to co-operate in all the activities. He also feels there is plenty to be done in this parish. May God be glorified for everything!

Fr. Francis says St. Mother Teresa is an exemplary role model for us to follow but it is very difficult to follow her. At the same time, she keeps inspiring all of us. Another important source is Blessed Martyr Devasahayam Pillai whose formidable faith that displayed during the long period of torture and humiliation, also keeps inspiring us. 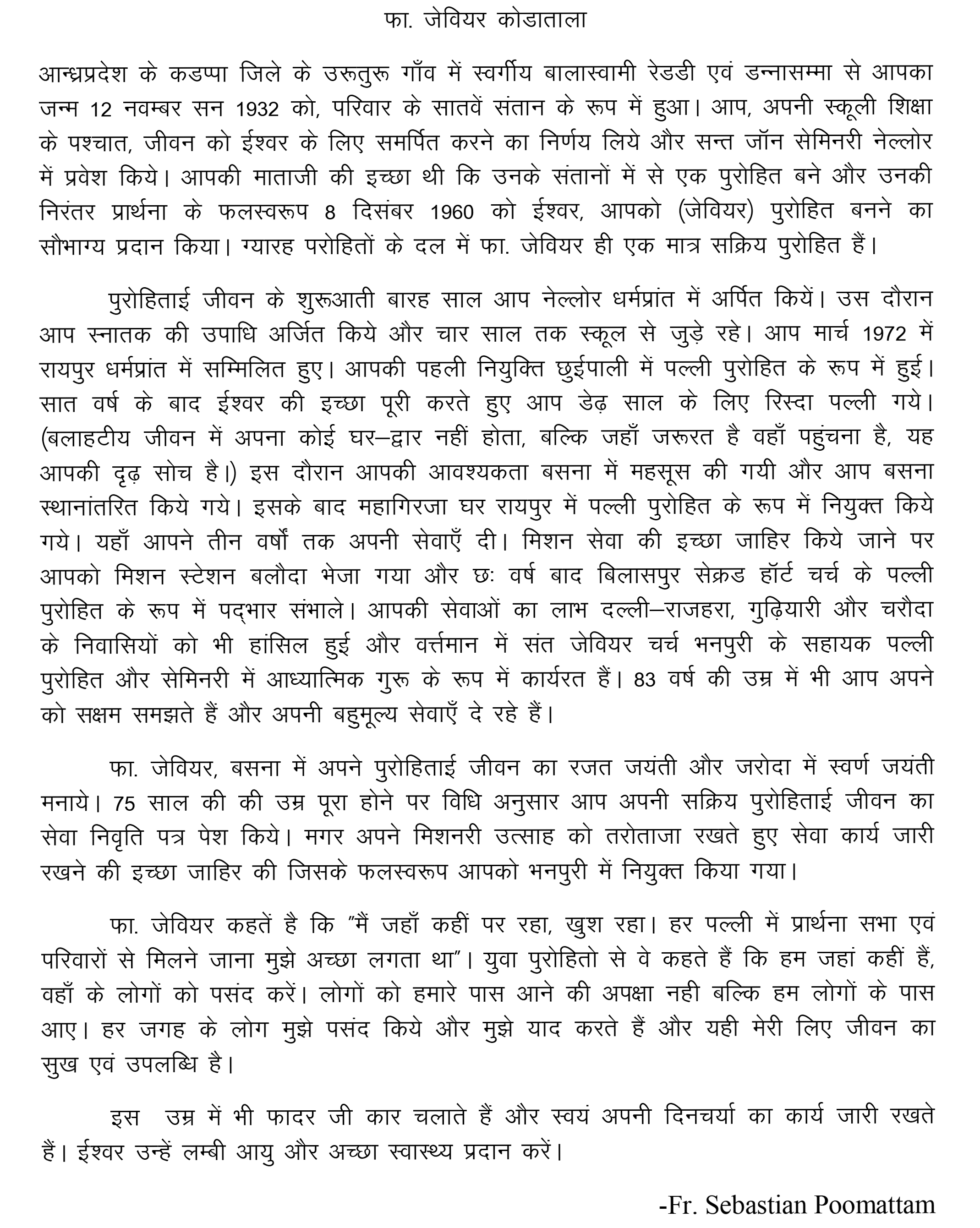 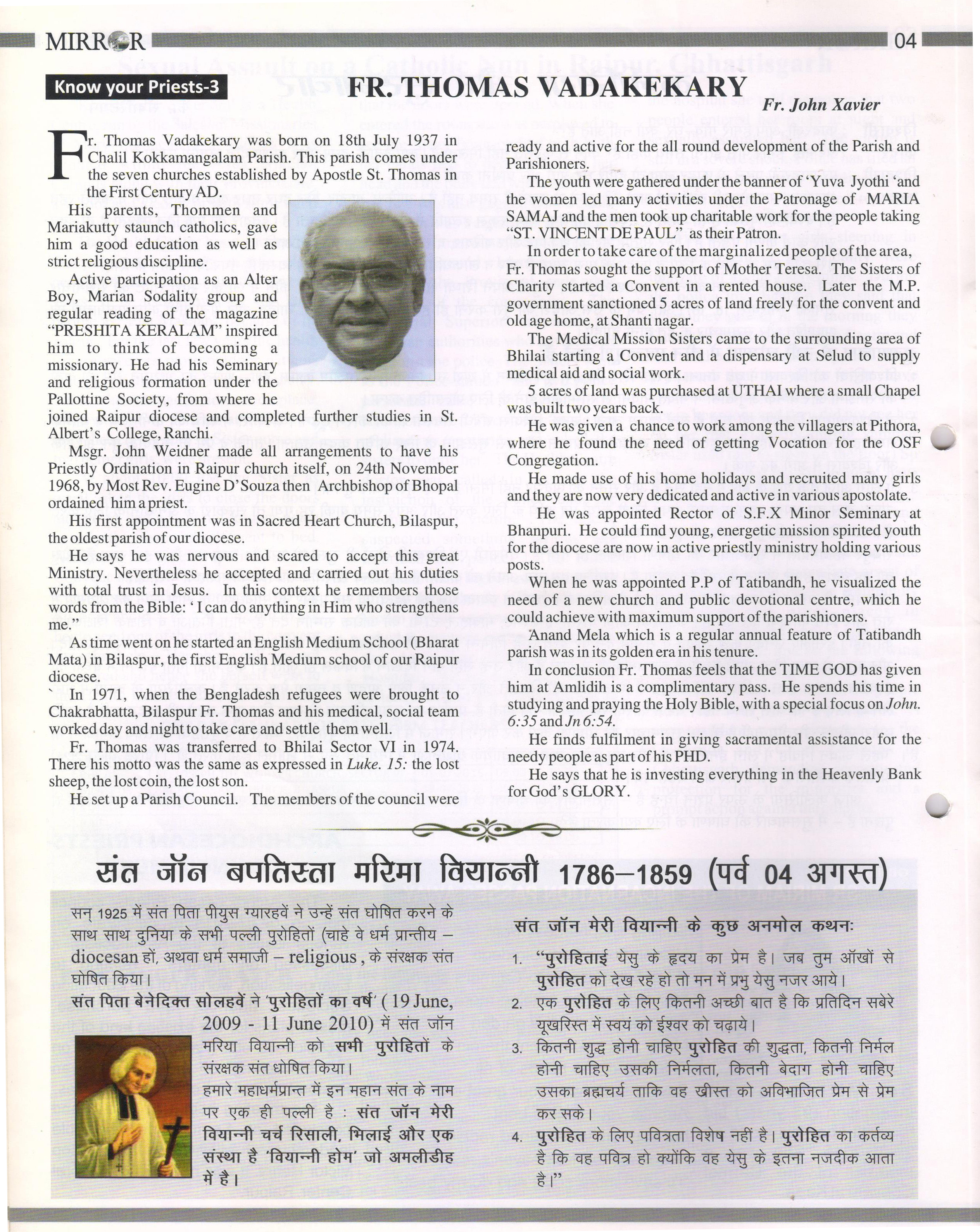 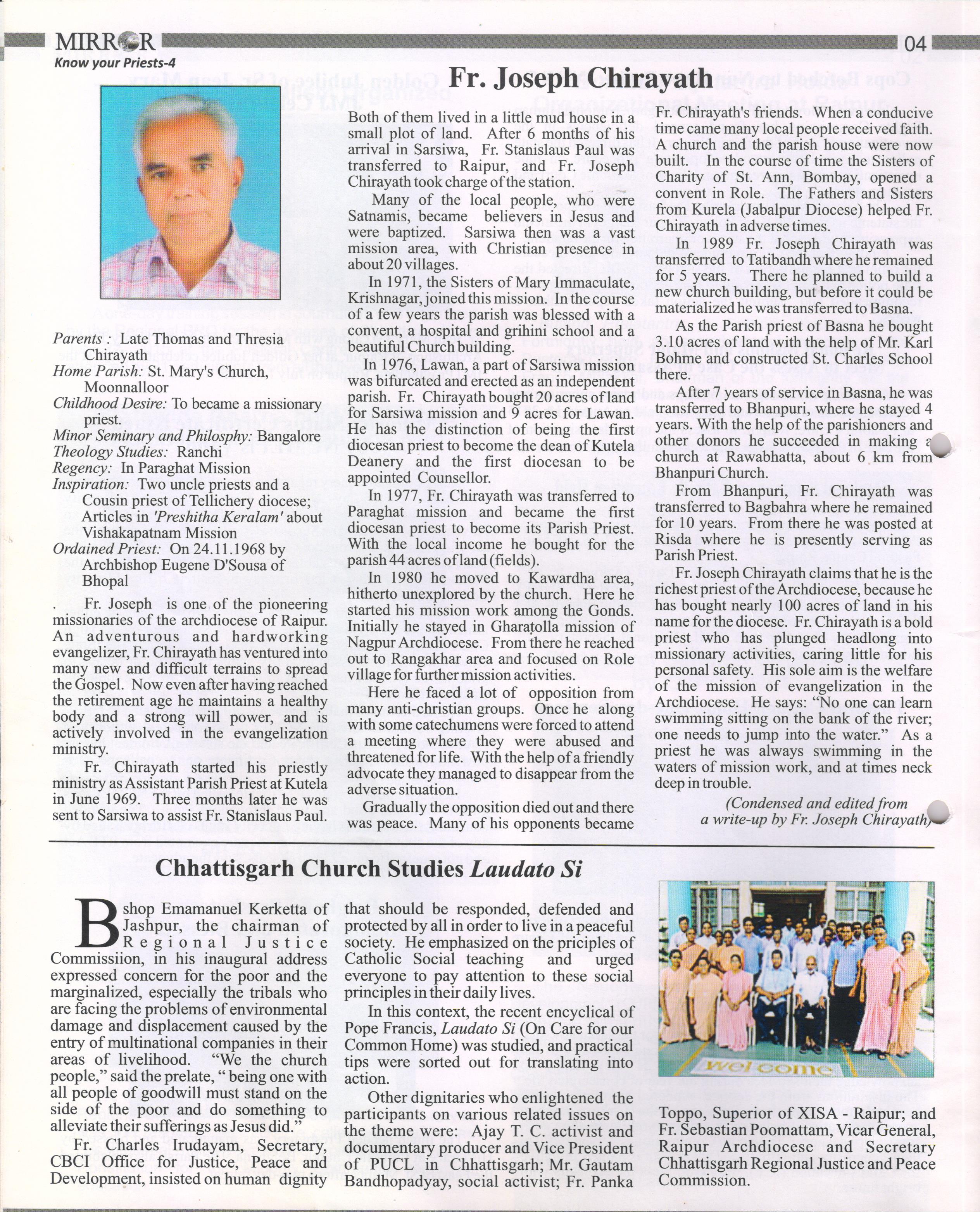 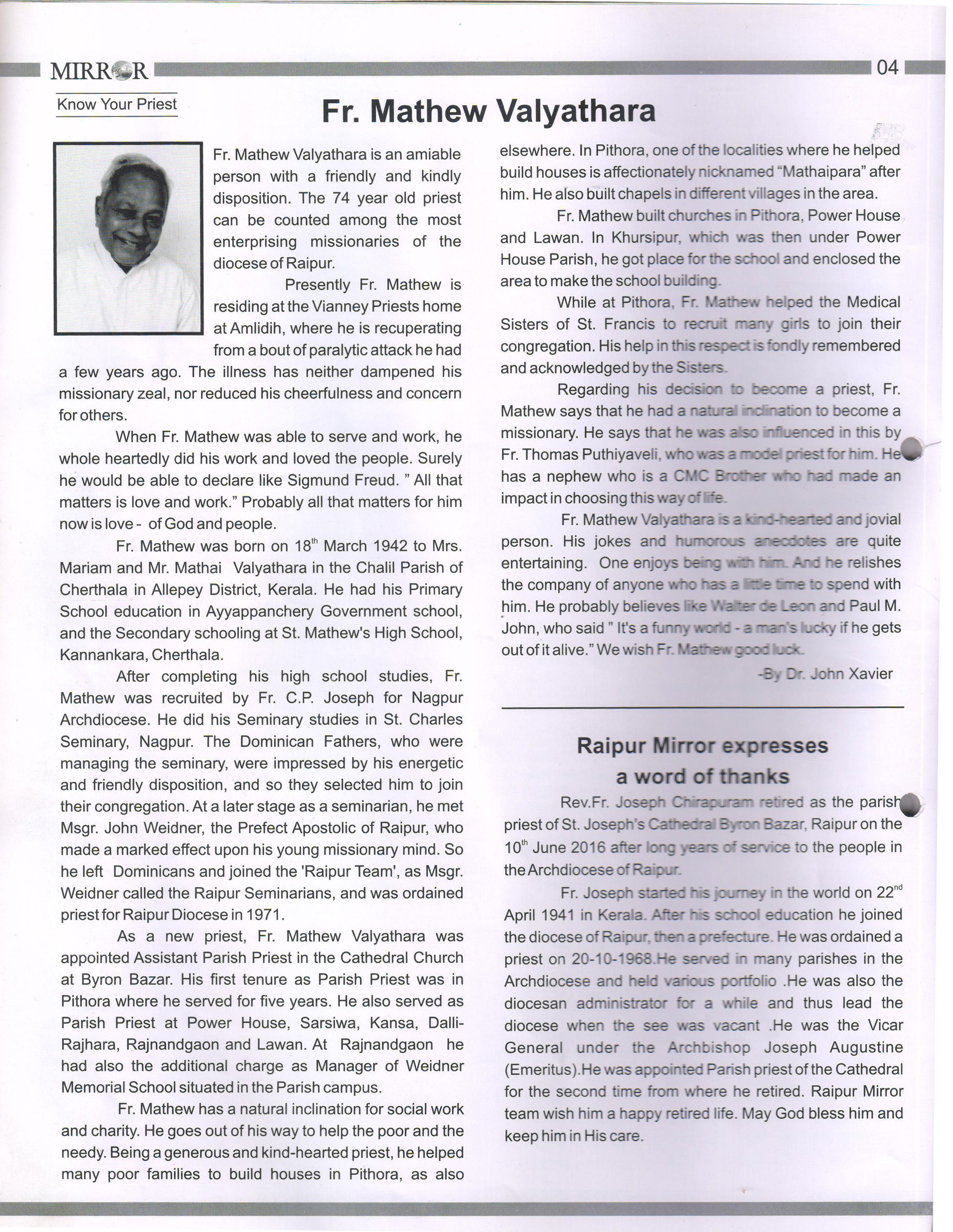 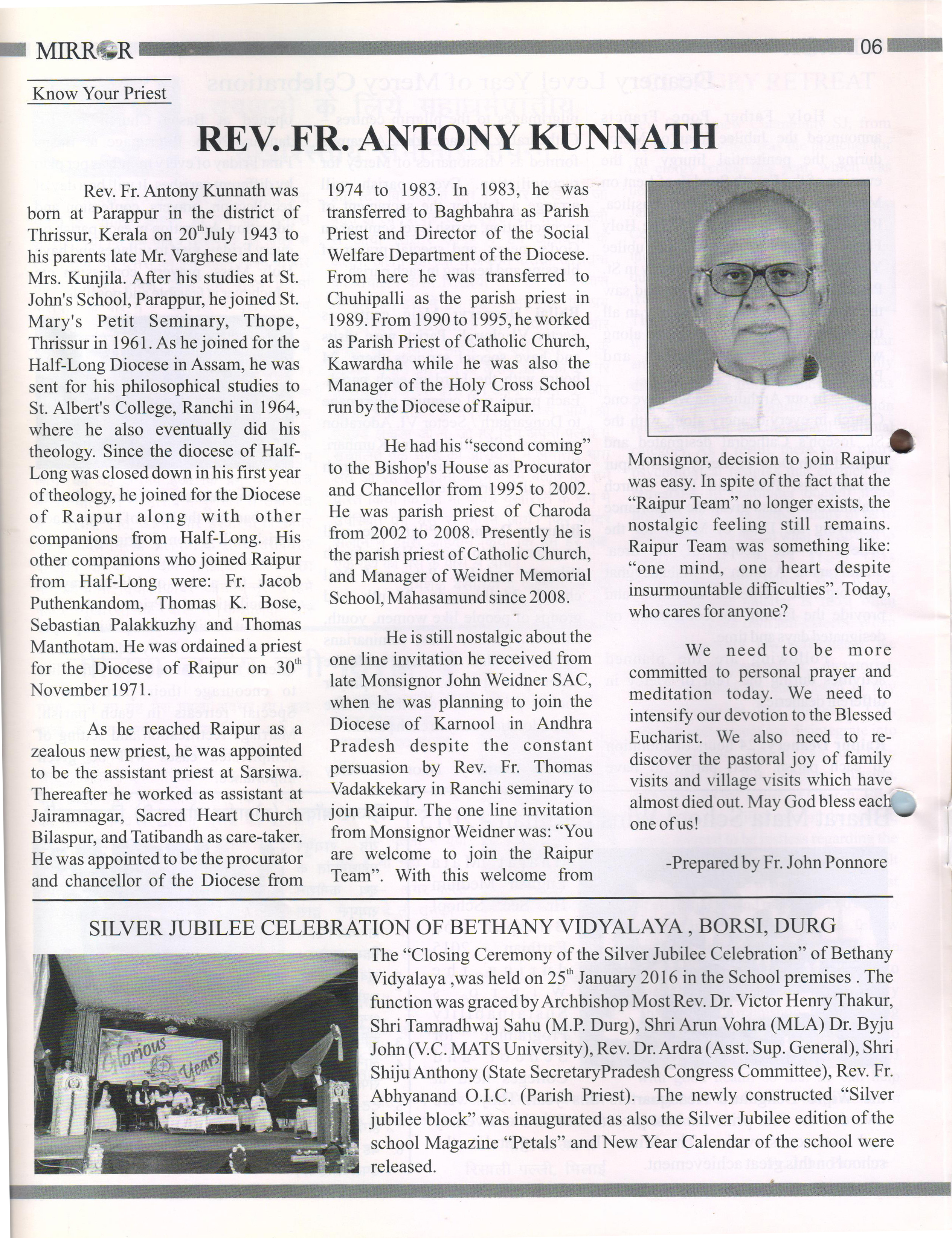 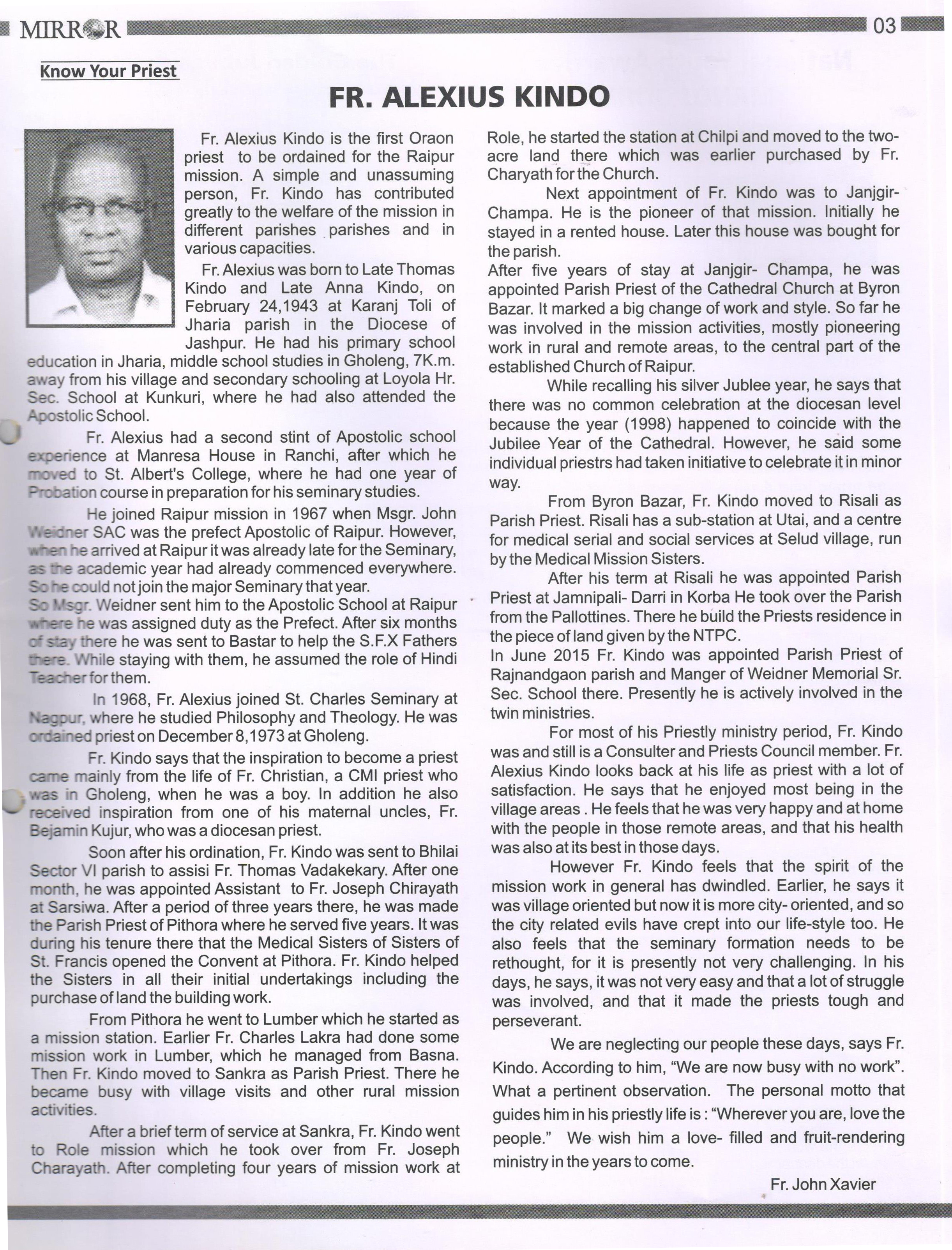 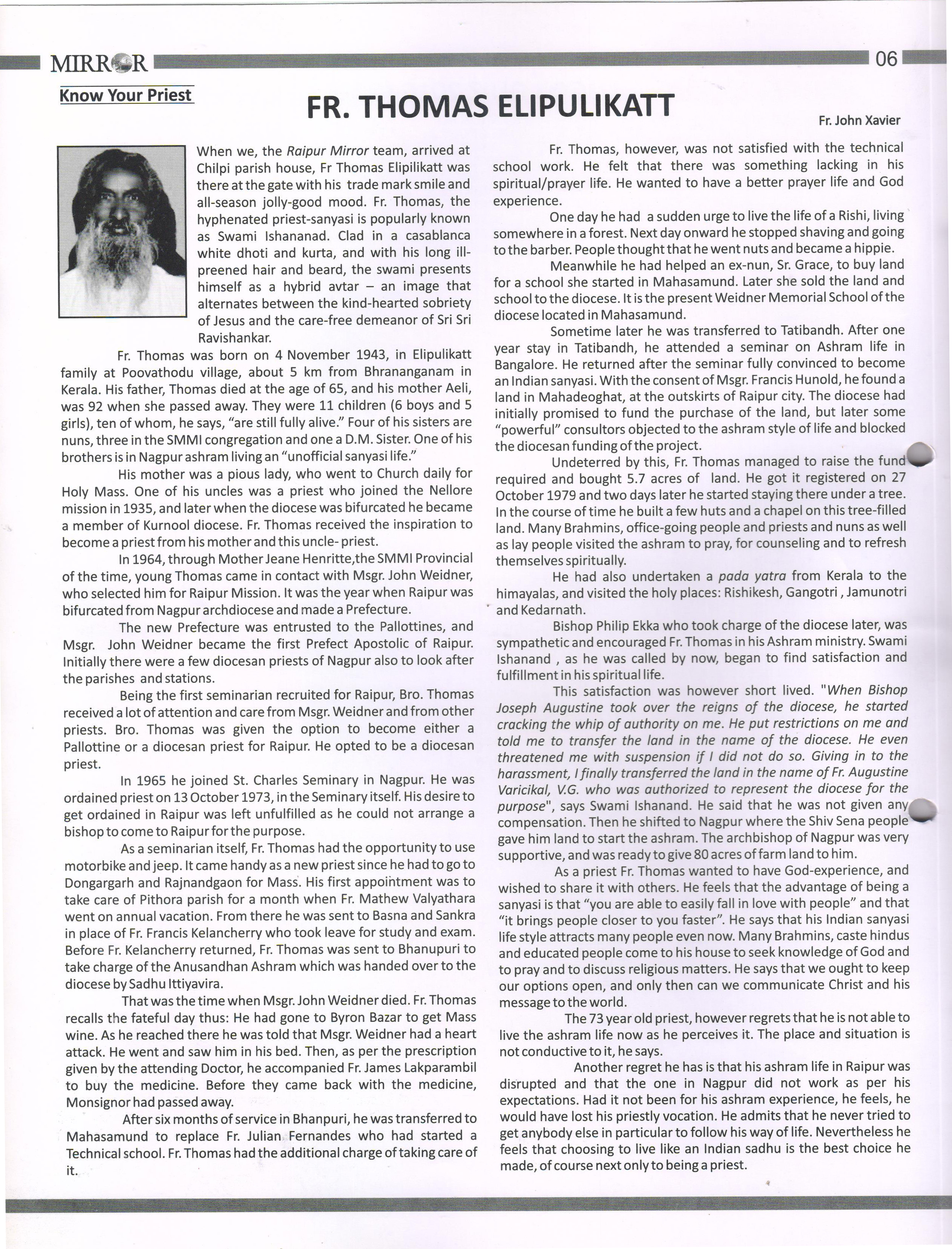 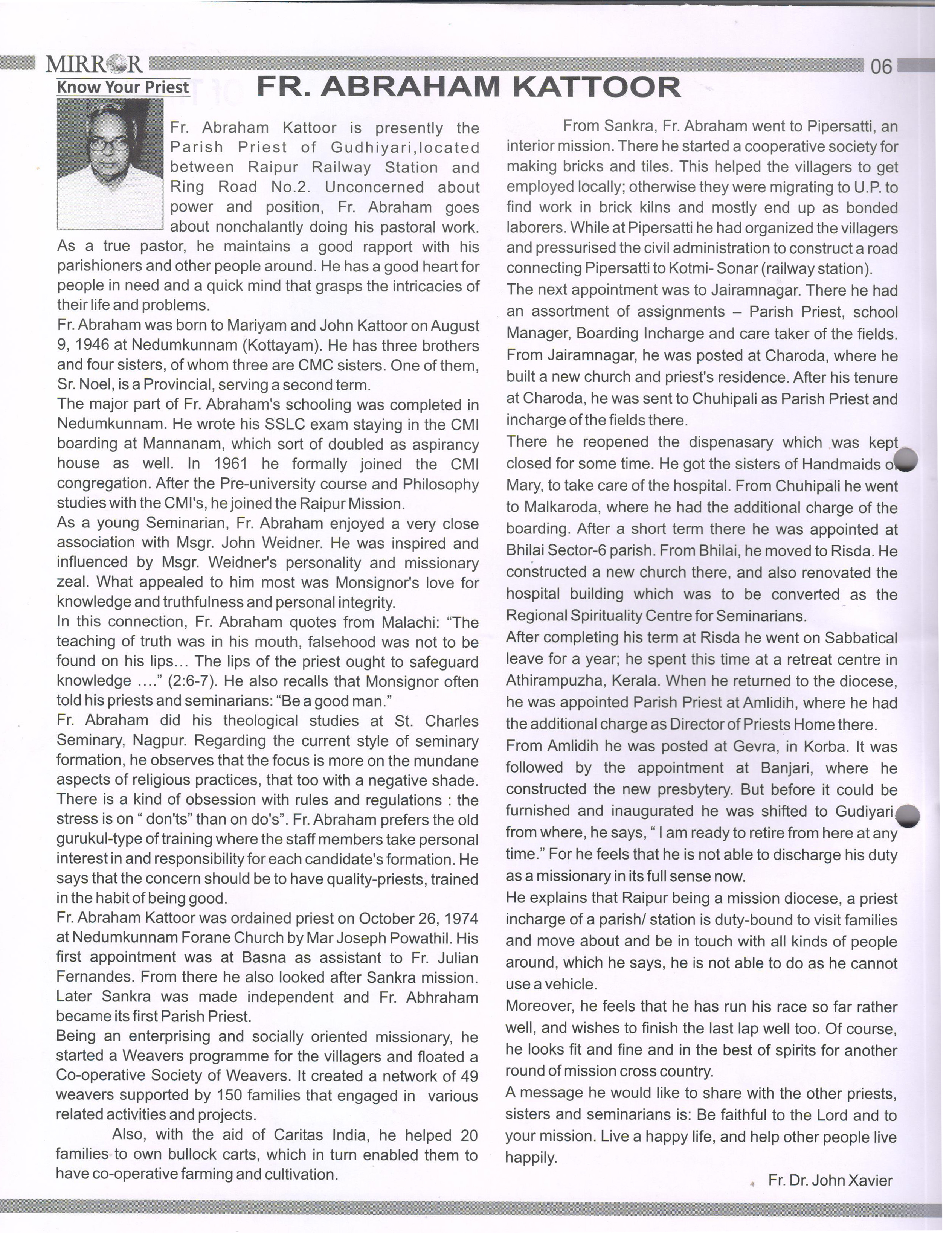 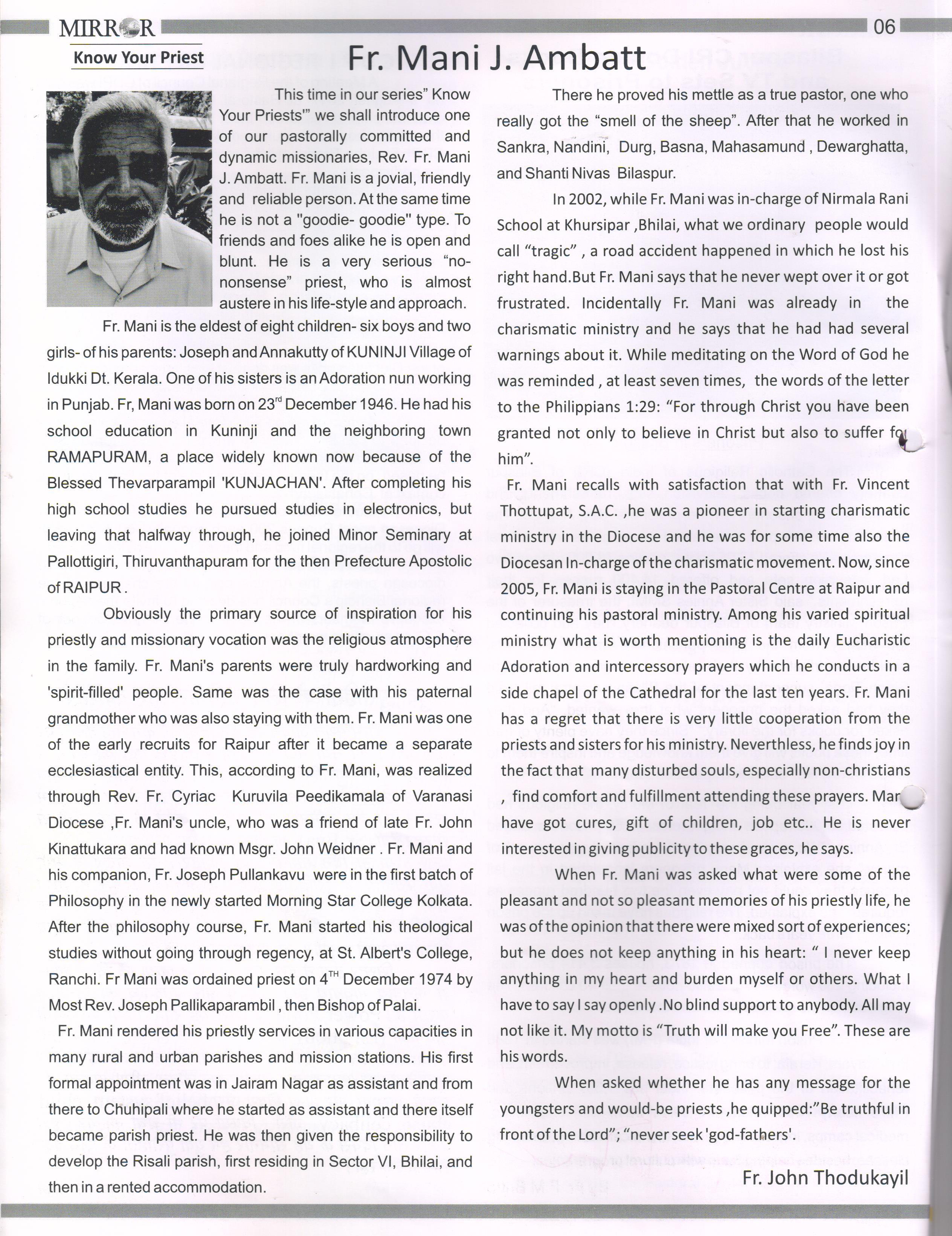 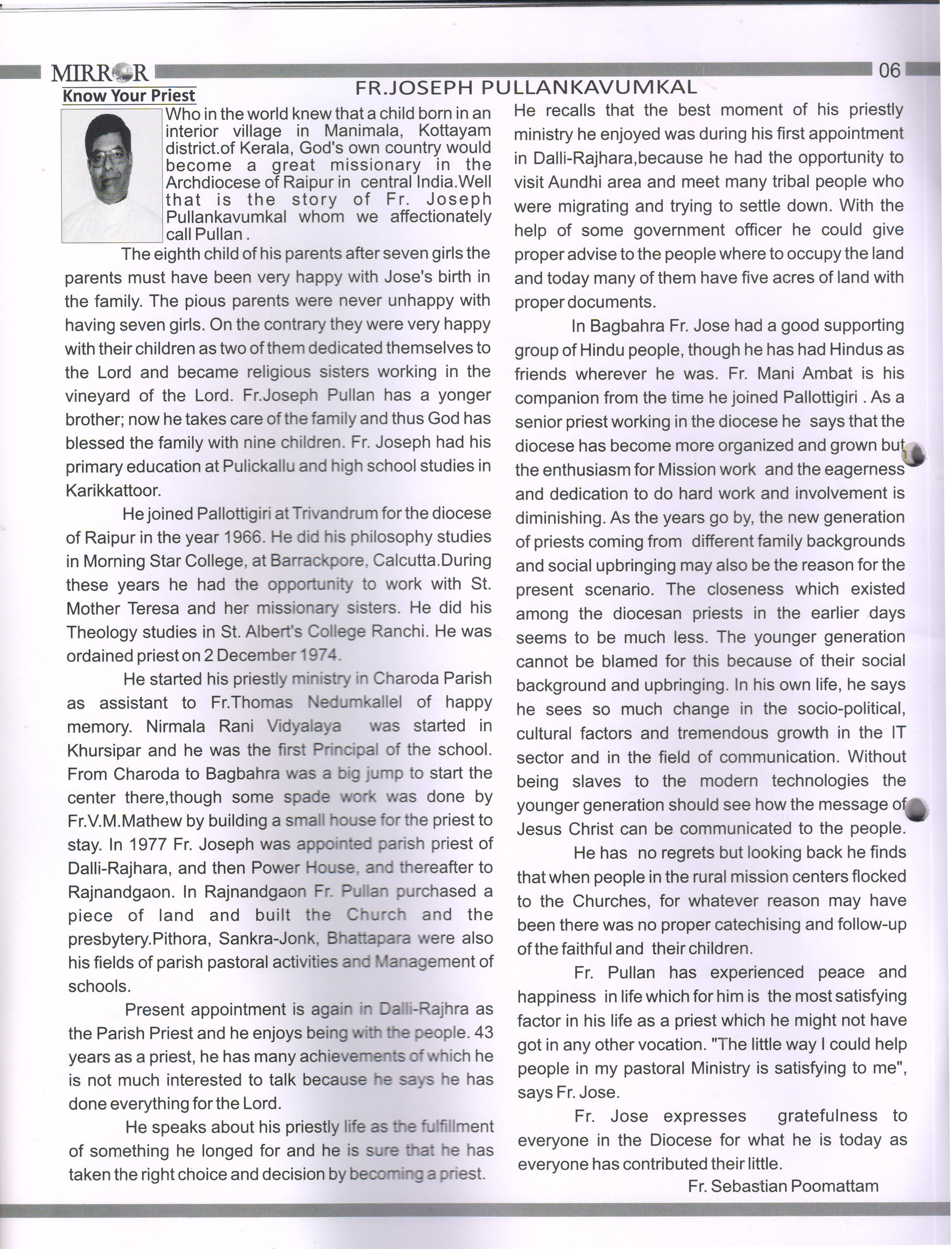 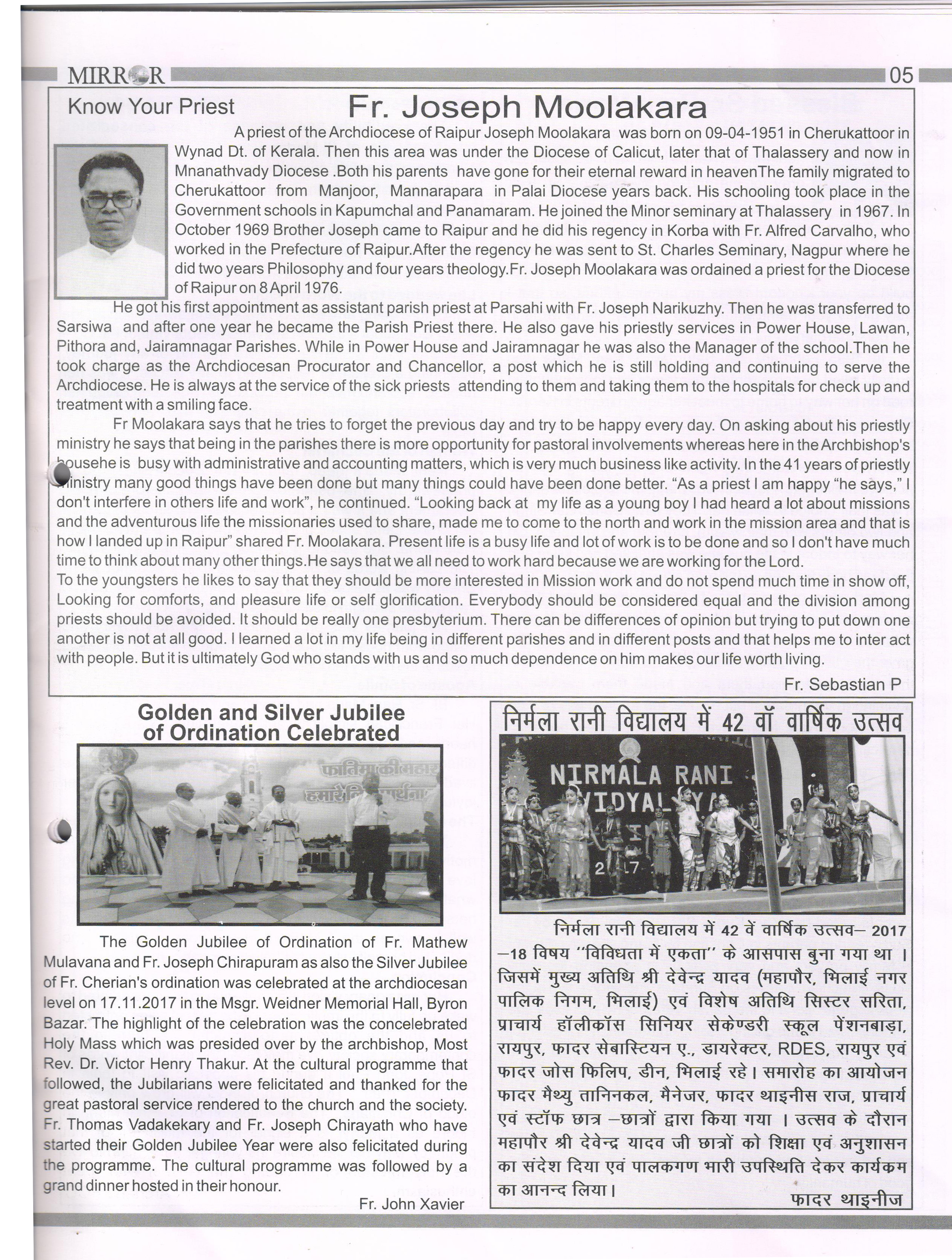 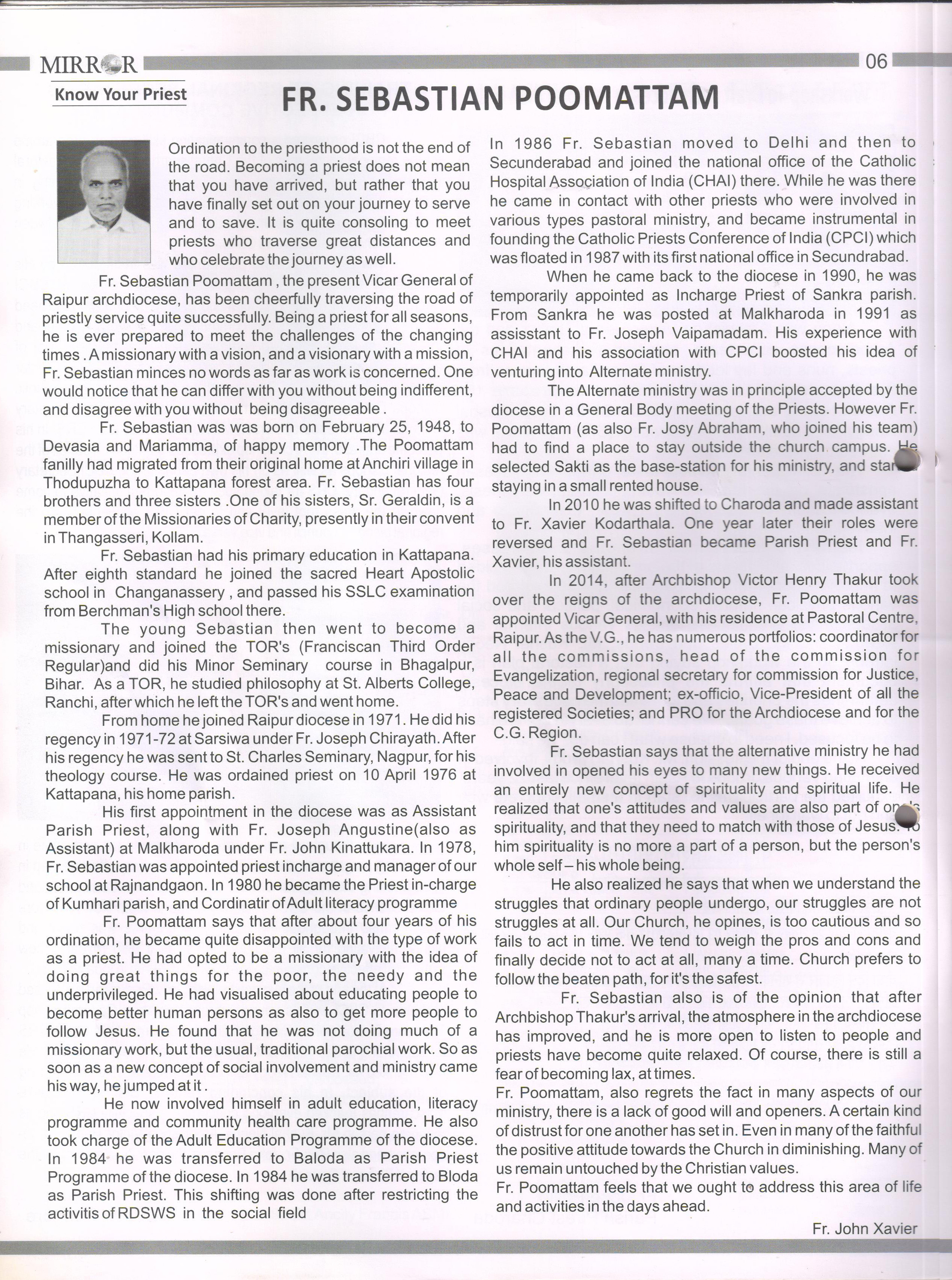 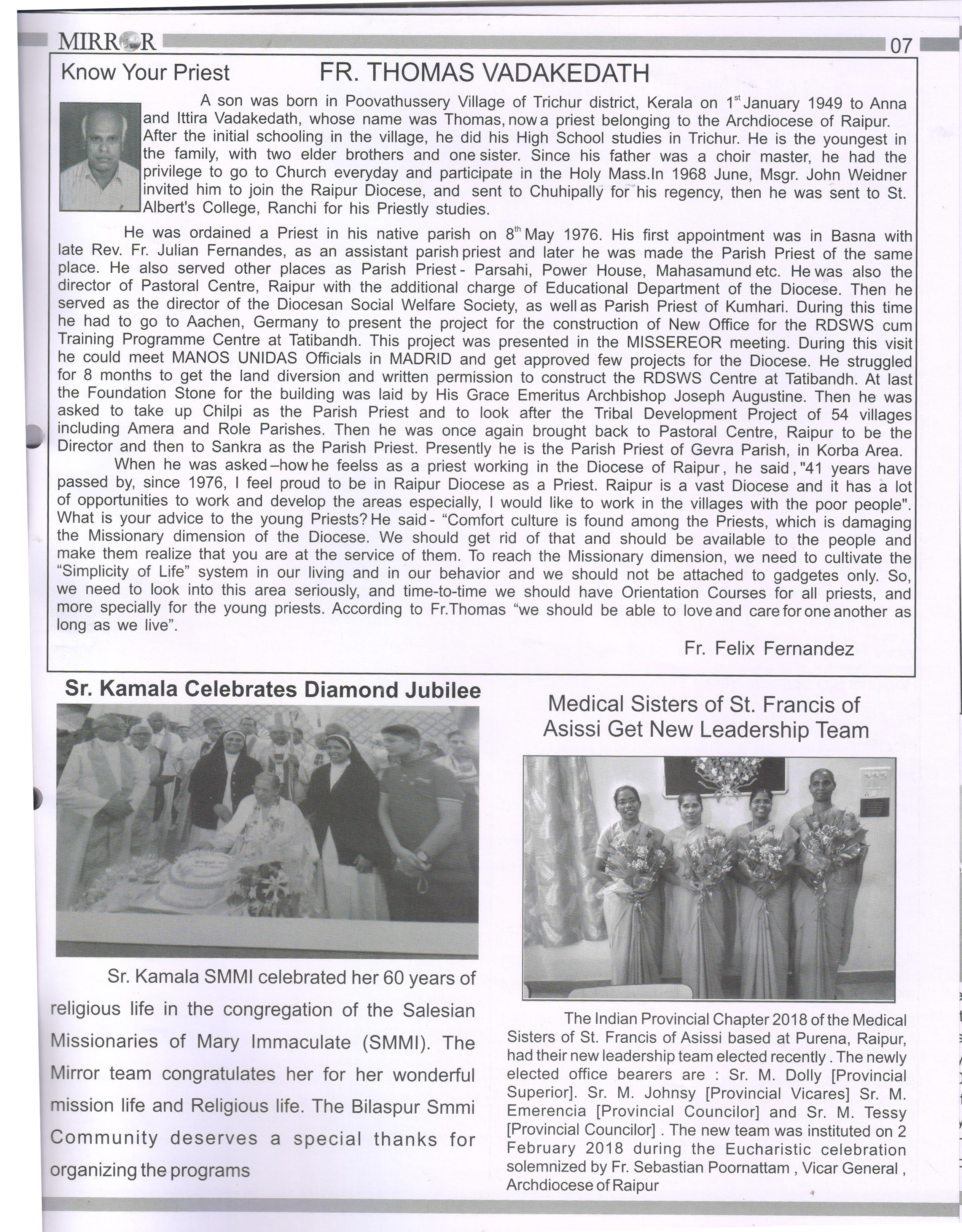 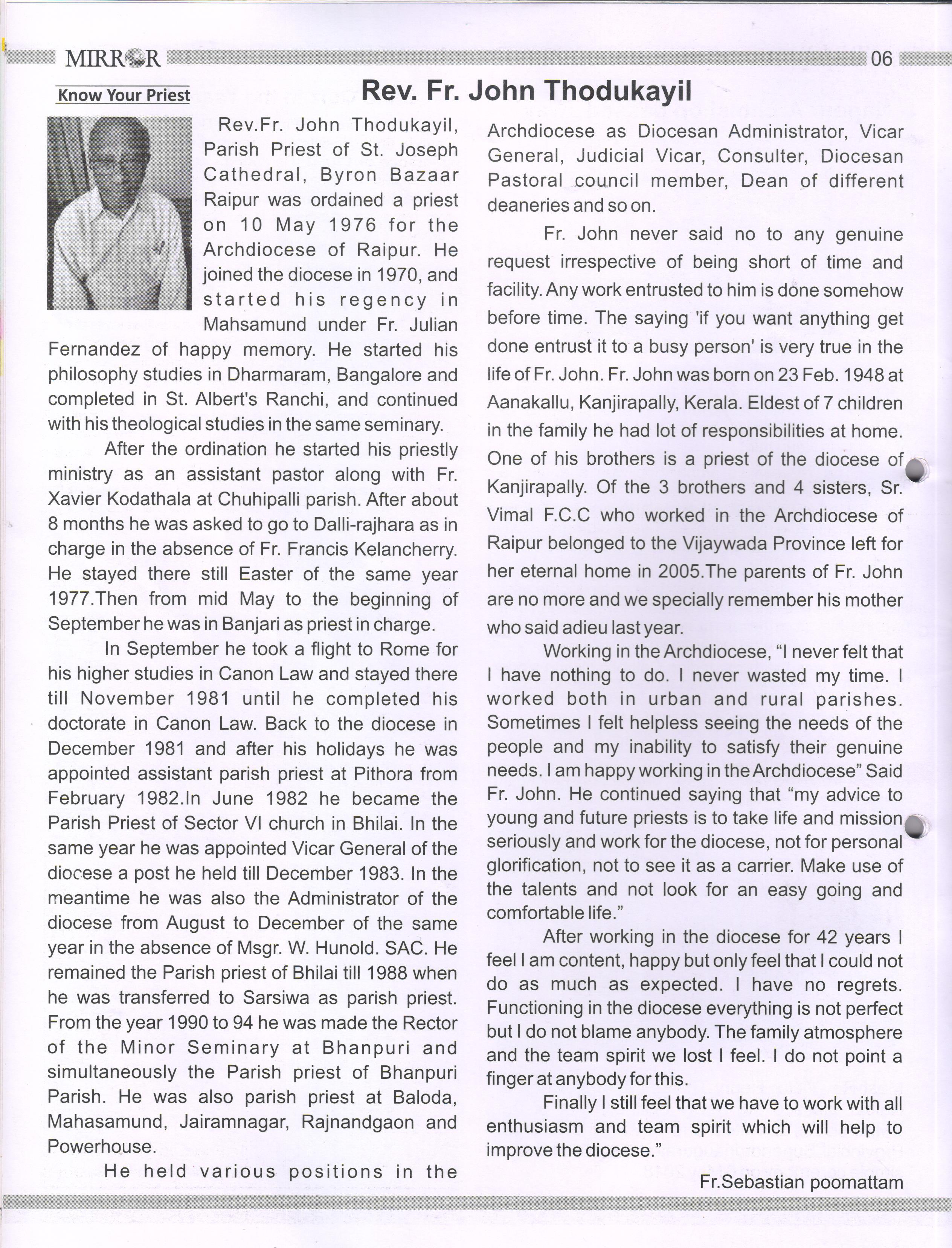 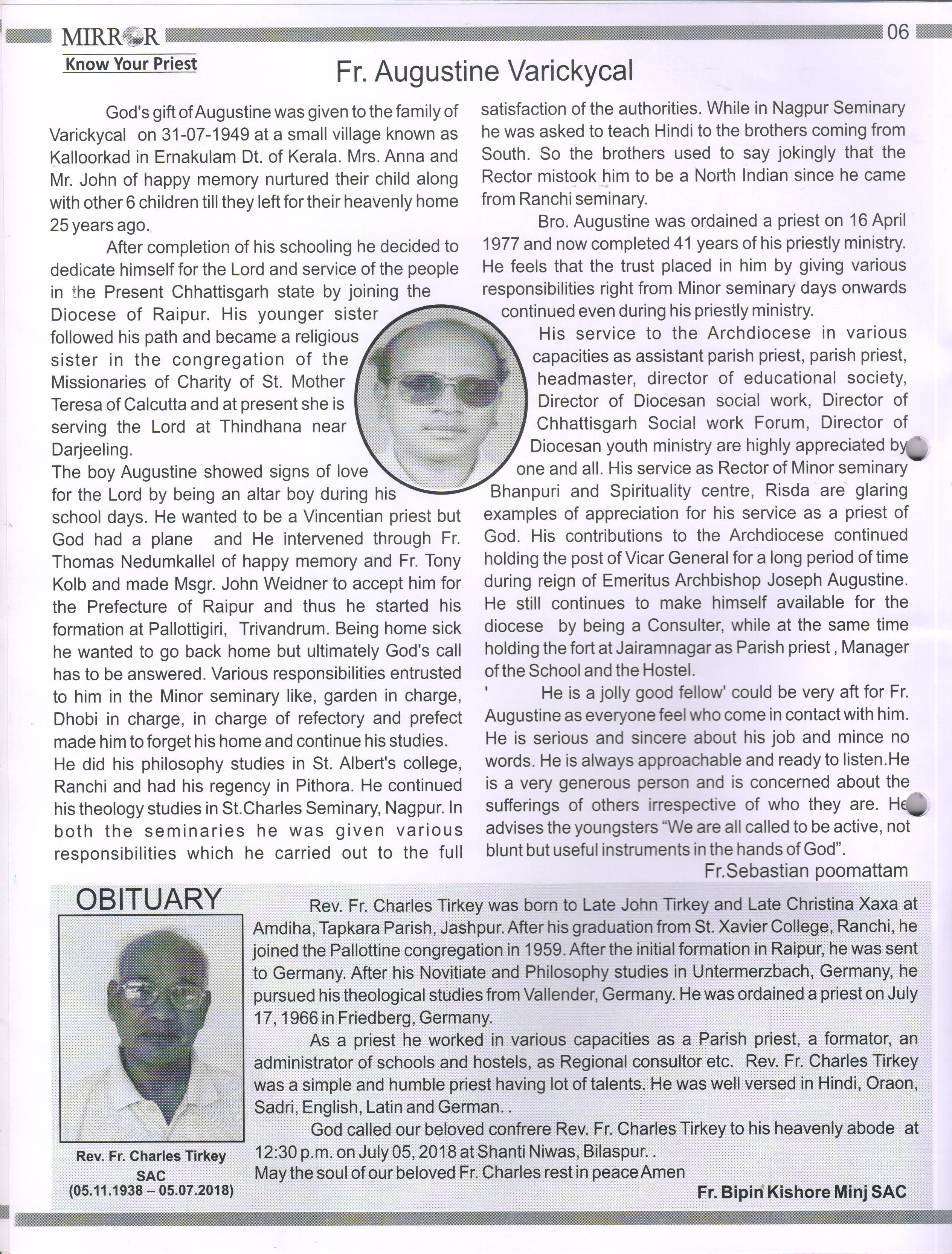 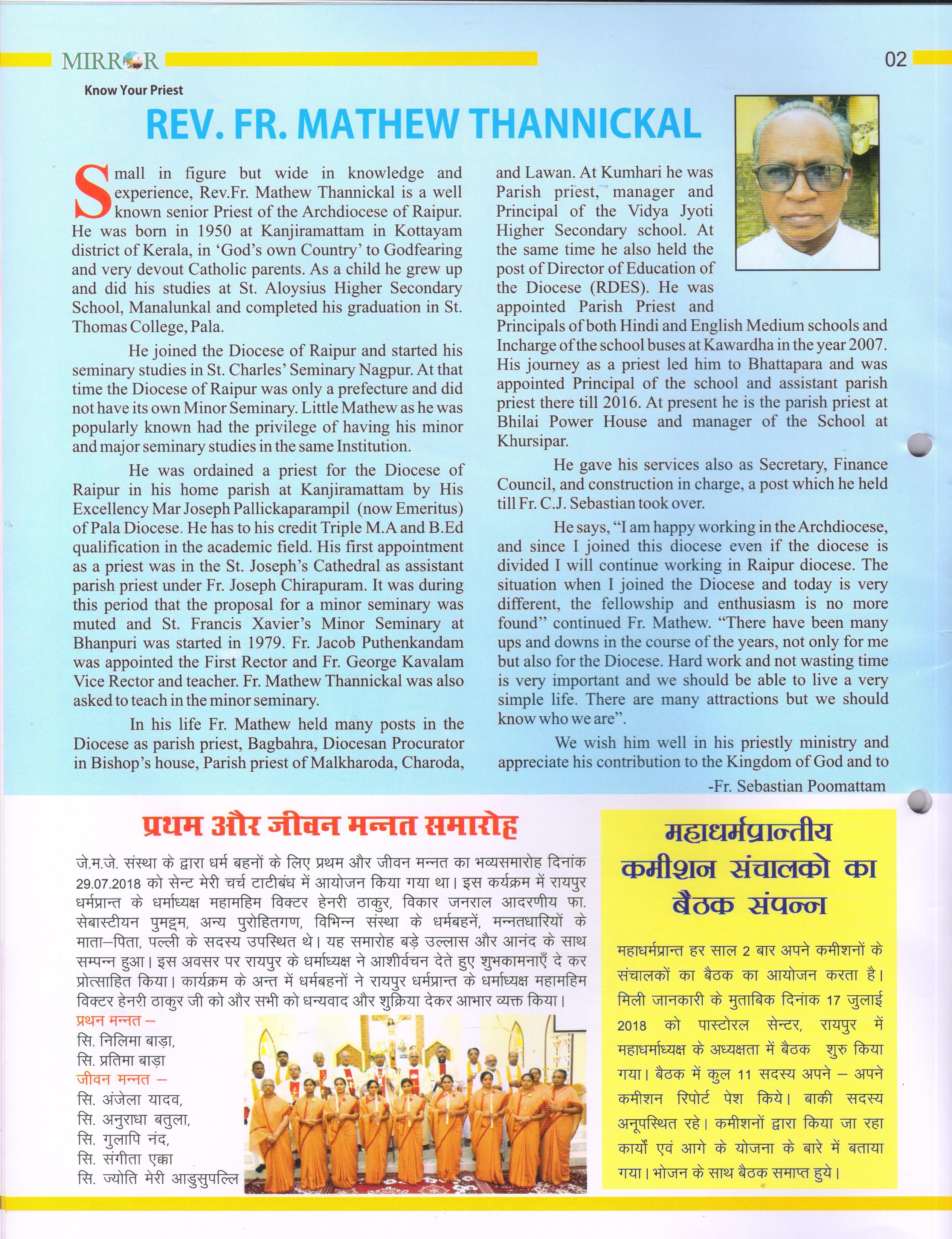 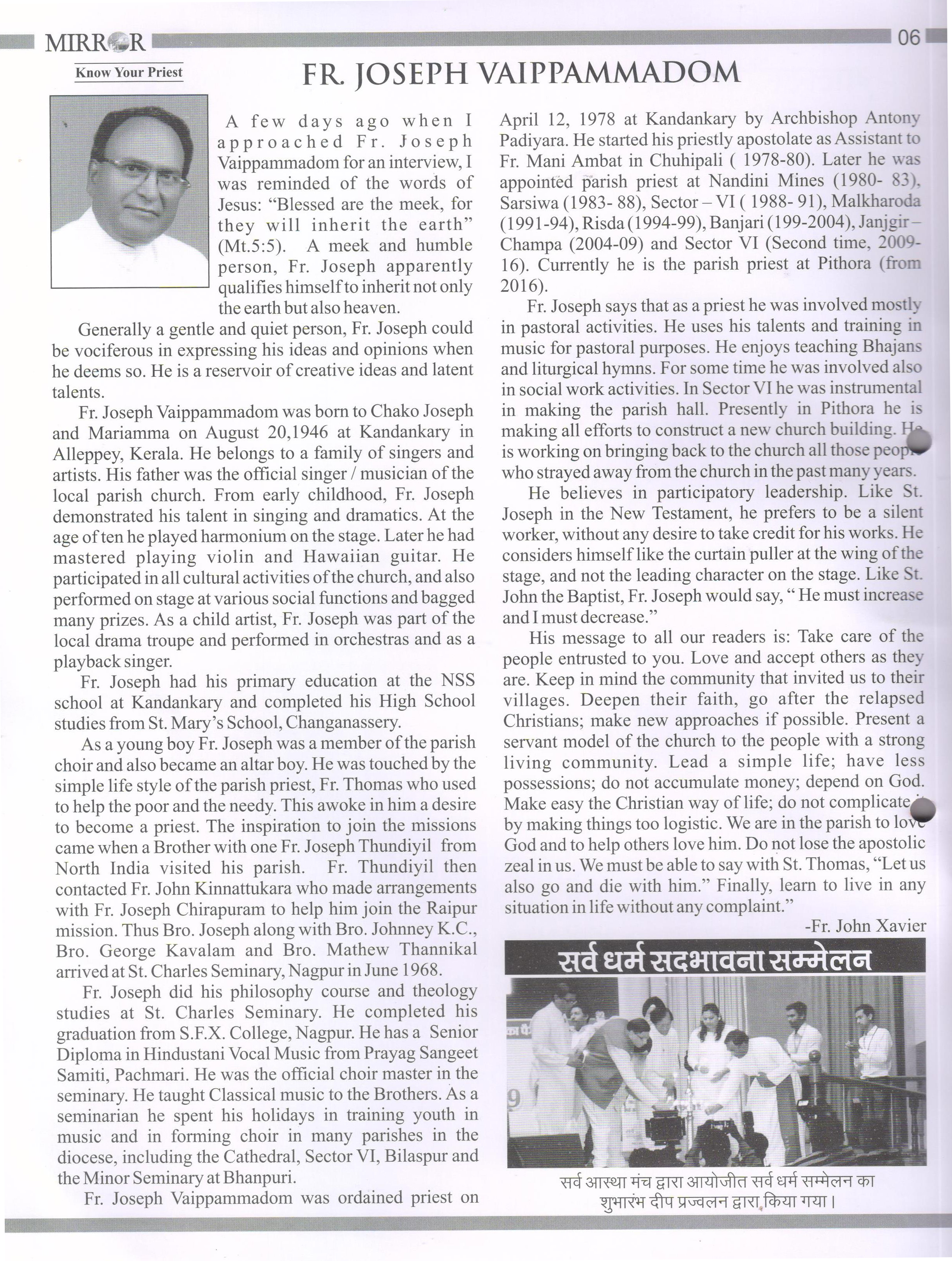 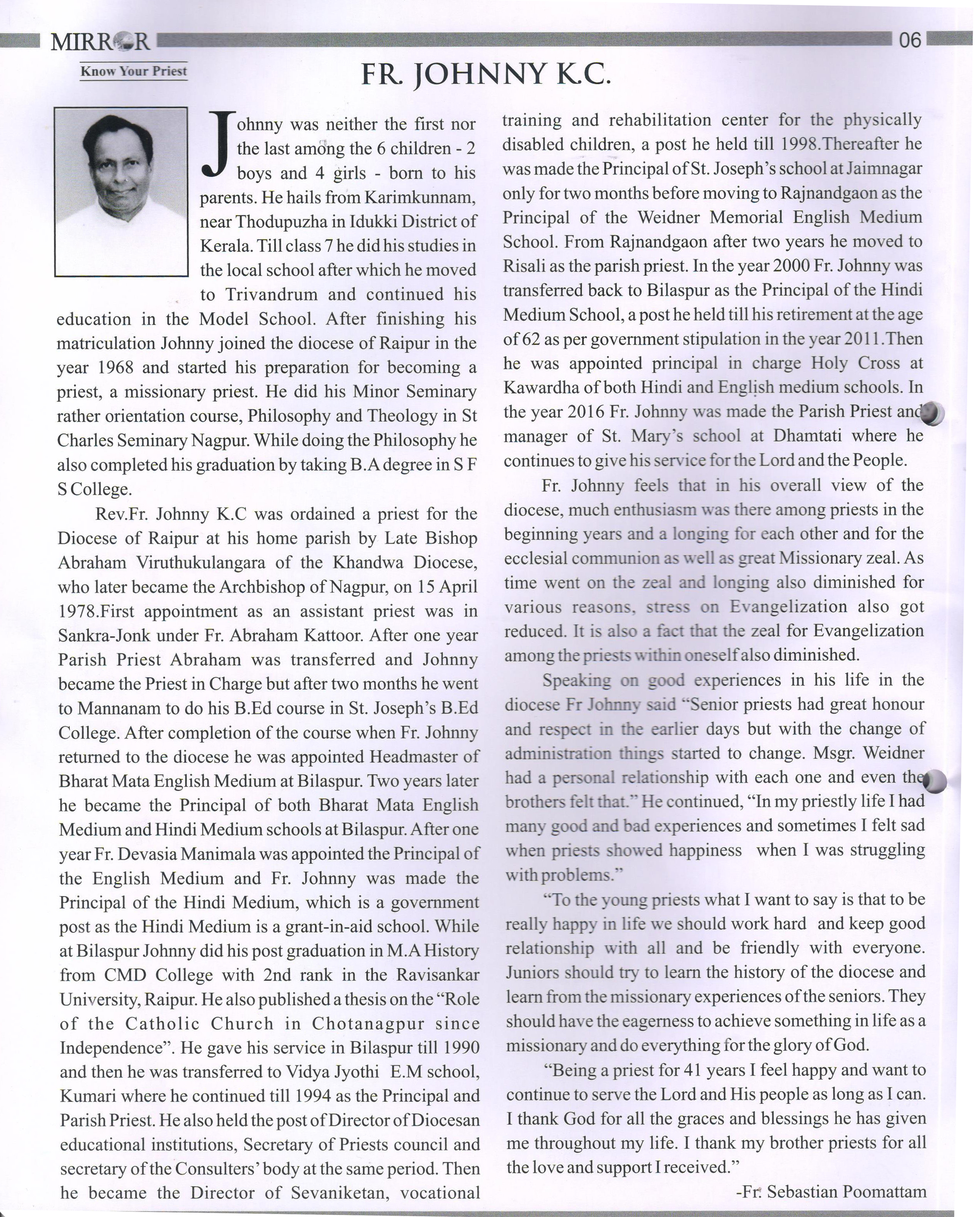 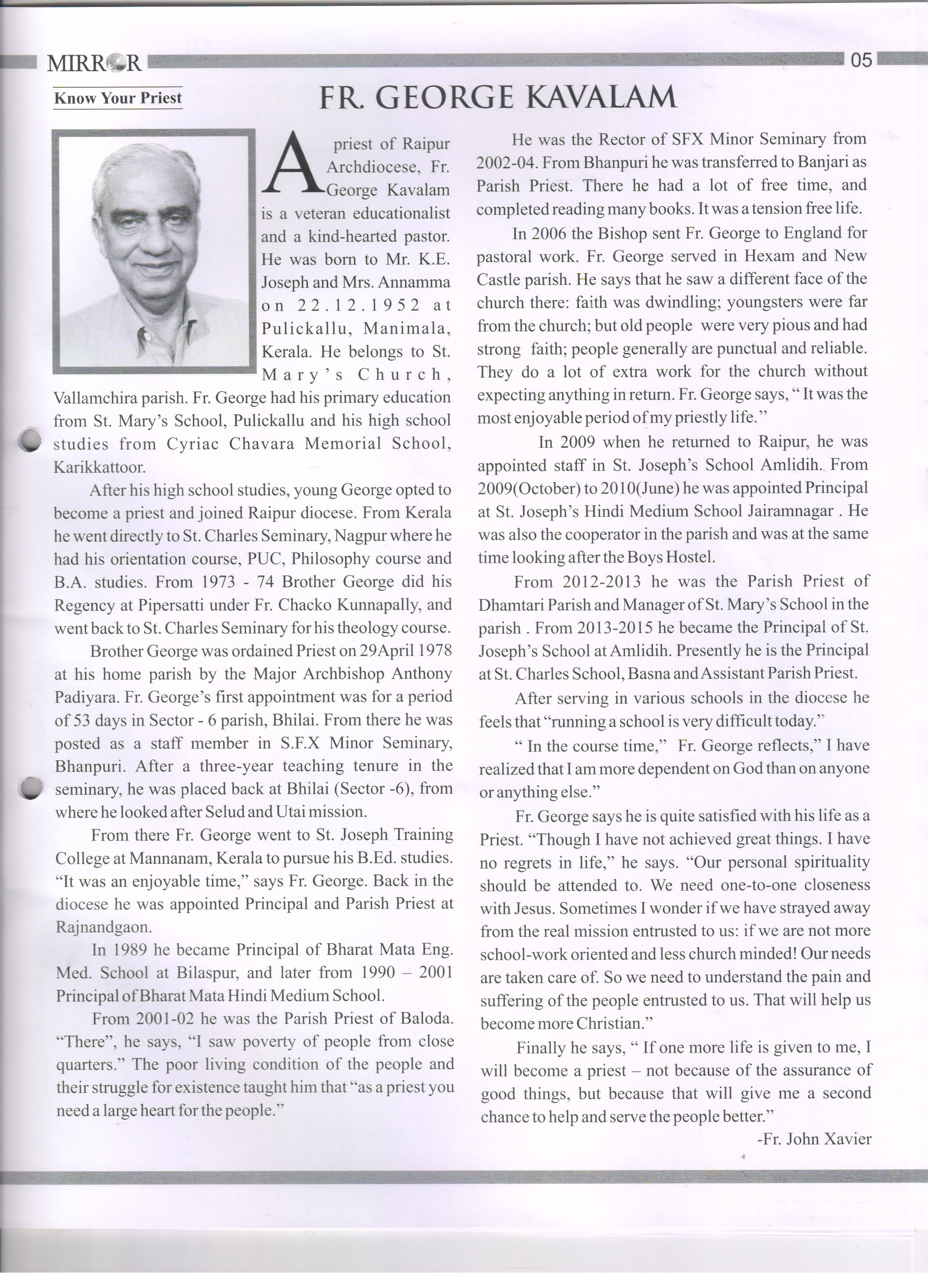 Copyright © 2021 Archdiocese of Raipur. All rights reserved. Powered by Boscosofttech